Well, one commission done one to go!
I am taking a quick break between
to create just for me!
I had 3 art journal pages half started & here
we are, nearly the end of March & not one done!!
Had to change that quick smart.
Here is page one of my brand new Art Journal. 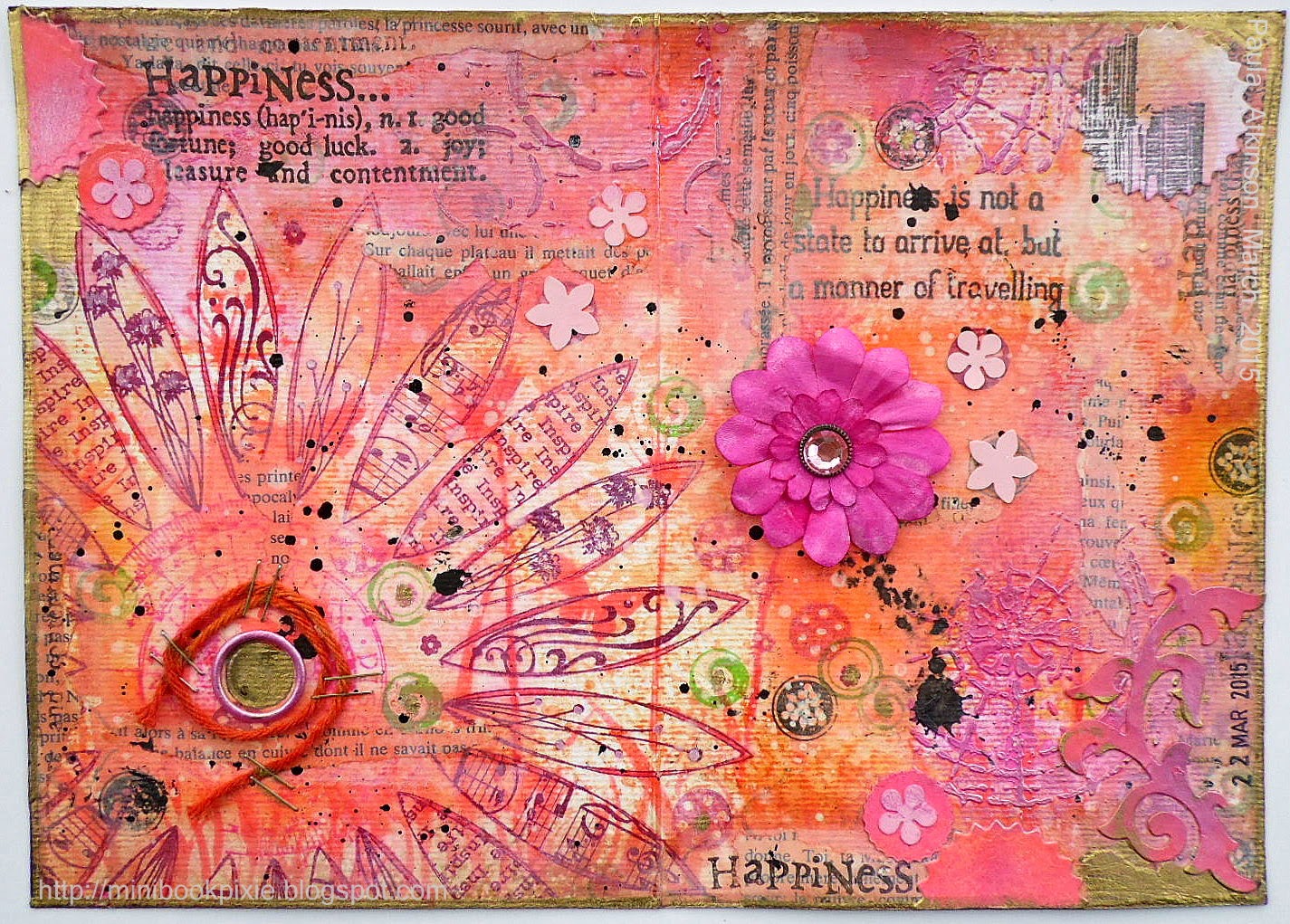 Bright isn't it!!!!
Yeah! Baby! Get those shades on!
This page depicts the colour of my thoughts.
You know how you just can't put into words
what you think and feel, well I can create in
a colour palette instead.
And after colouring that flower, I had pink fingers
for over a week because gloves disappeared.
This album is hand made from 140lb water colour paper.
Each page measures approx. 10ins x 7.2ins
folded down the centre. It is a
workable size for me.
Each set of pages will be attached
back to back and a cover made at the end.
I can add brads, staples etc. and they will be
hidden by the next page. Cool!
Materials Used;
Dylusions Sprays; Tangerine dream, Lemon zest
Rangers Distress Picked Raspberry
Stencils; Crafters Workshop &
Tim Holtz
Stamps; Technique Tuesday
Acrylic Silks, Inka Gold
Brad - from stash.
﻿
Posted by Paula J Atkinson at 11:48 am 1 comment:

This has been the biggest commission I have done,
in over 5 years. I am extremely proud of it!
I did have a few "what have I done" moments,
especially on Thursday when the cover refused to close
and having re-designed two other covers,
it was still refusing to play nicely!!!
I have not uploaded every photo, the album has 19 pages,
plus two mini books containing 12 photos each.
The picture below is not the best but it perhaps
gives you an idea of the dimension of the project
and shows the main book part with the
sleeve closure behind! 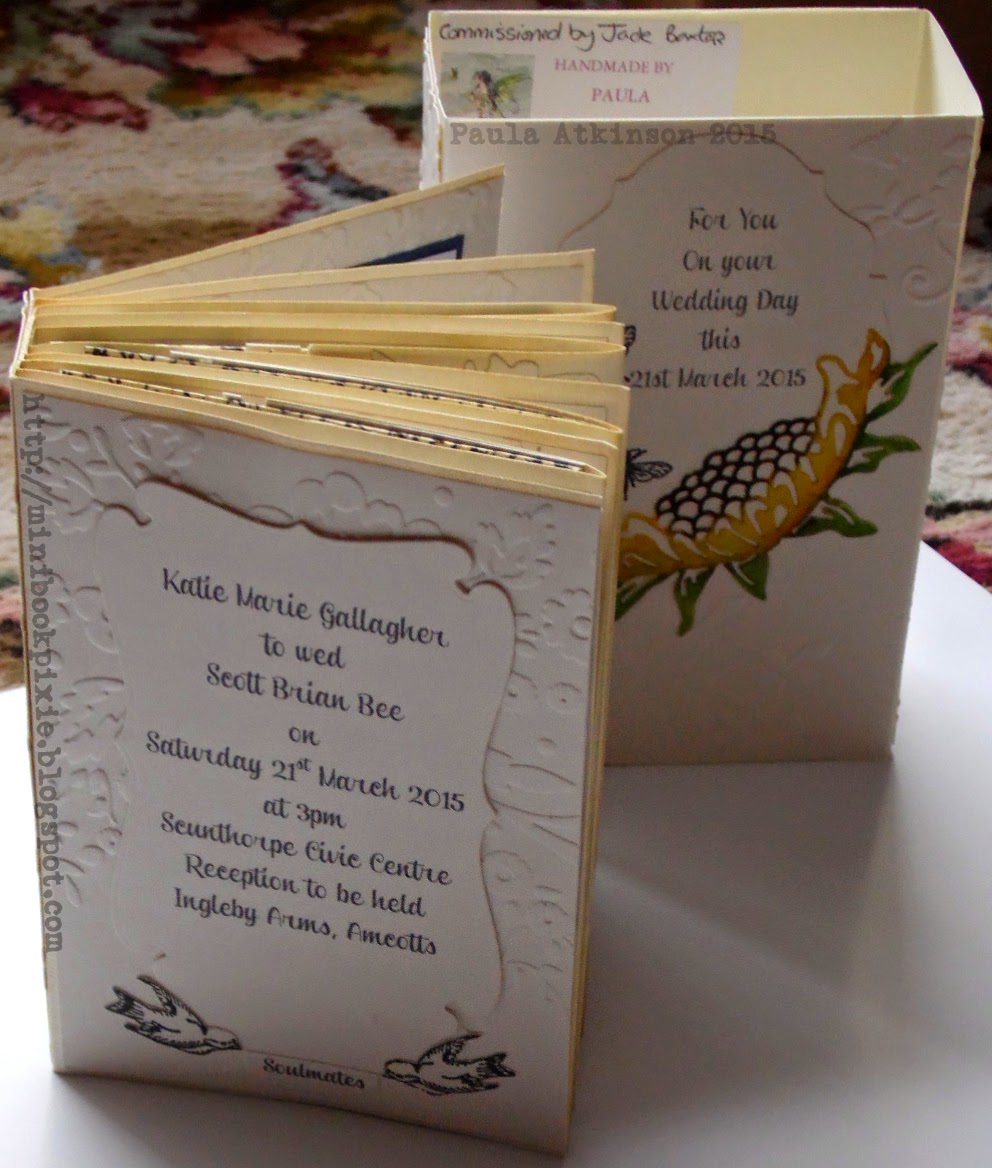 My album was commissioned by my friend, Jade.
I have made many for her in the past, sadly
all pictures were on the computer that died :(
My design brief was, yellow/navy/ivory/sunflowers.
I made the body of the book a month ago, but had to wait
for two separate sets of photos.
Jade had this made in secret and so photos of the
dress, veil etc. were sneaked whenever she could.
Four pages have been set up for photos of the actual day to be added.
The wedding was at 3pm yesterday and so today I can share.
This shows some more tiny photos in a pocket which I made and stuck to the album.
If you are wondering about the actual album,
I copied a version of the original Laura Denison One & Done Album
on YouTube by Dawns Inspirations.
Dawn glued down the flap sections and added tags inside.
If like me, you needed more room to add pockets to the flaps,
consider making the main cover piece with a wider spine.
At just 1 inch, the spine was not deep enough for
my project, however the slip case was easy
to create to keep it together. 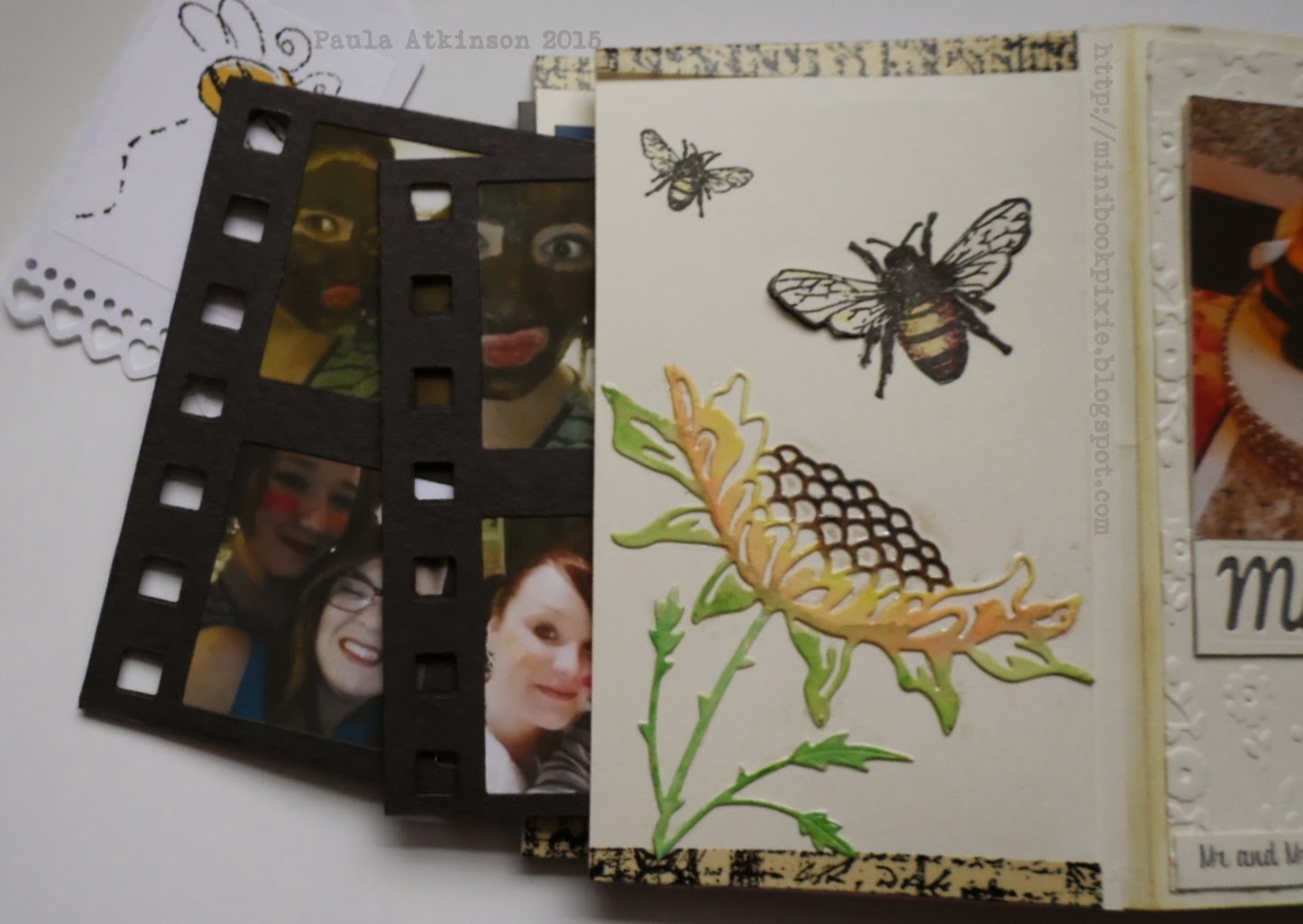 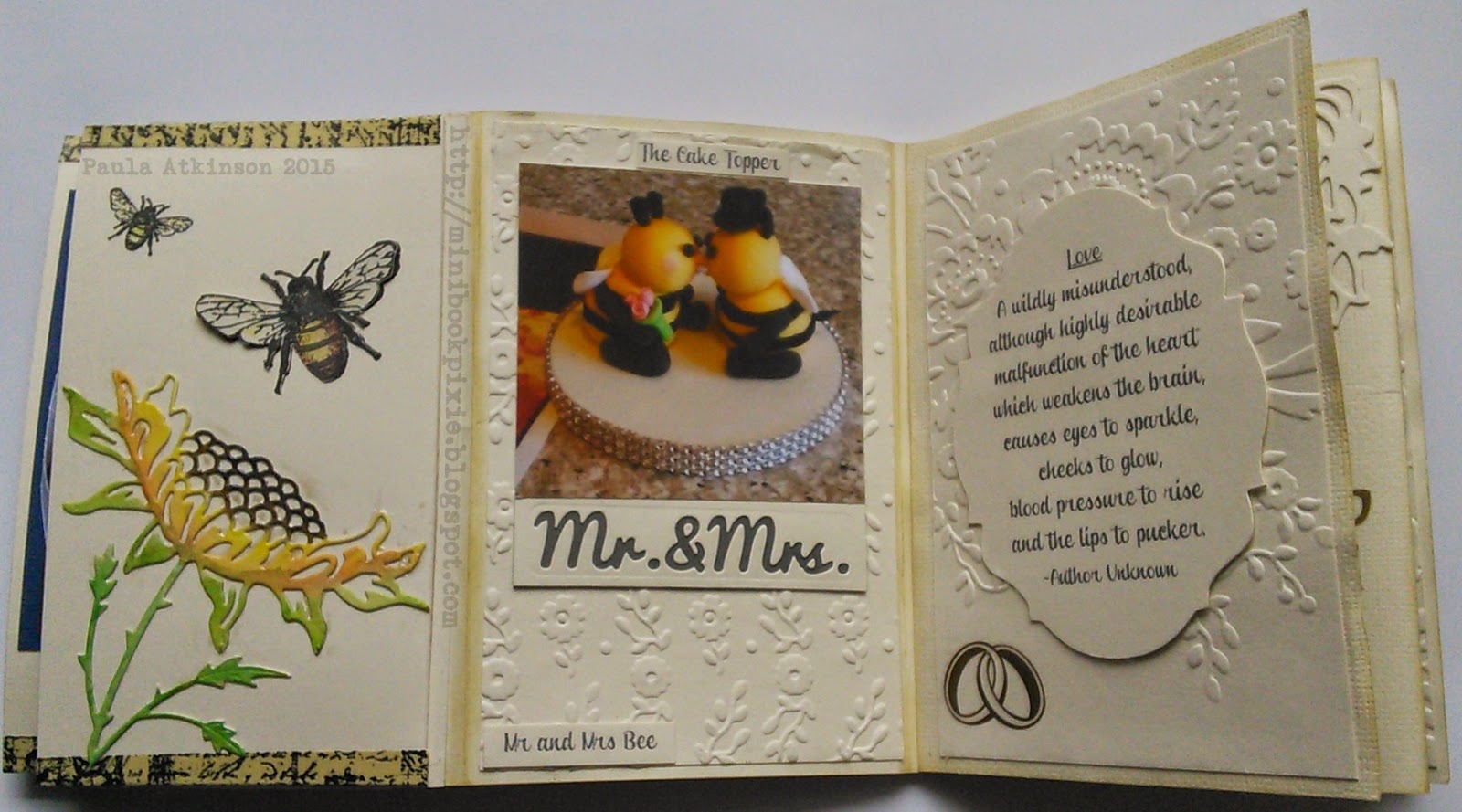 I fell in love with her veil!
I have a far better photo of it but it was
taken before the album was complete and so
the heart & love with the shoes was missing.
﻿ 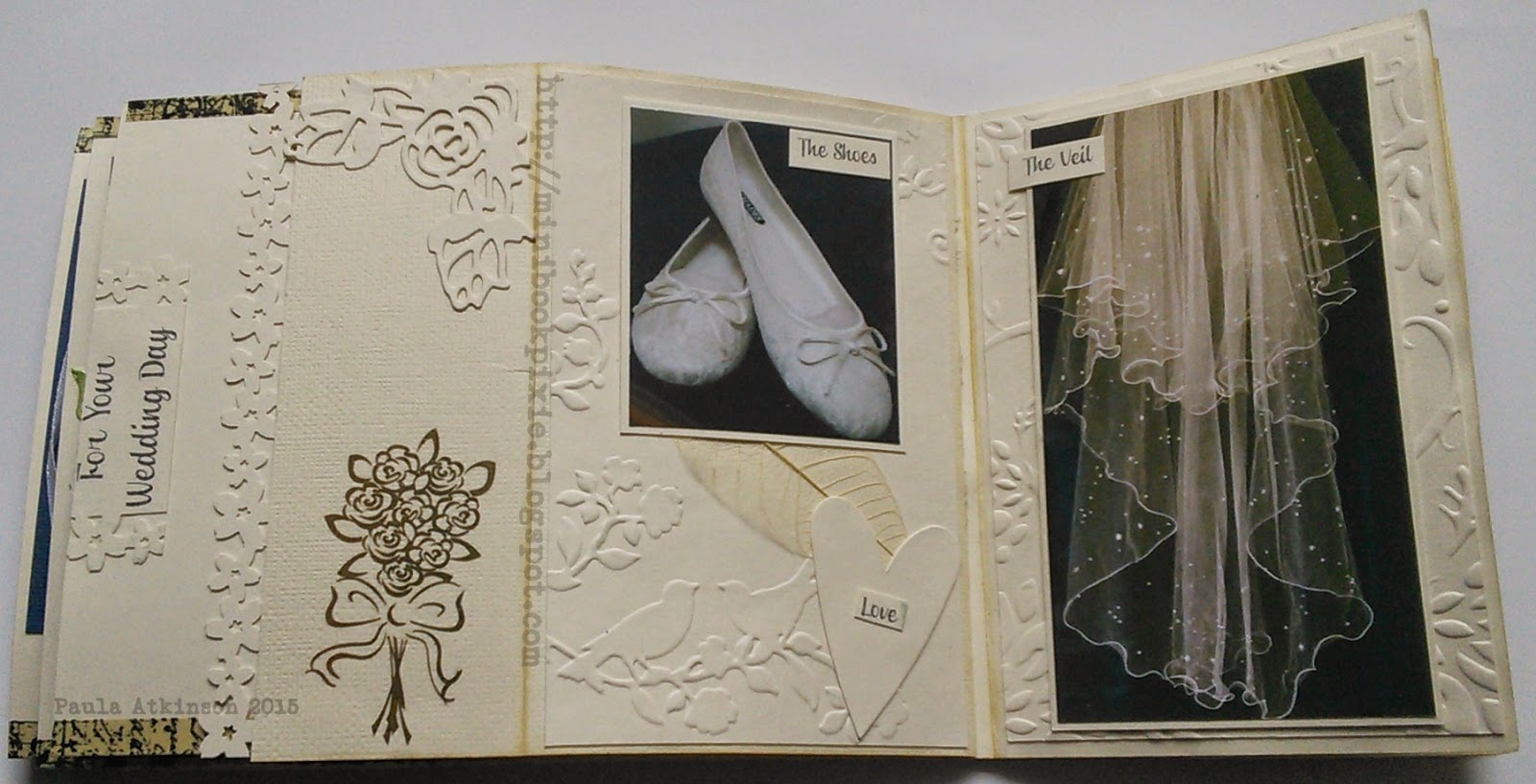 Poor Jade struggled to get a photo of the dress.
She said it was hard to find some place to hang
it so she could get good light and not be caught in the act!
﻿

This is one of the two identical mini books,
which went into pockets to house 24 photos of the girls
on the two nights out.
﻿ 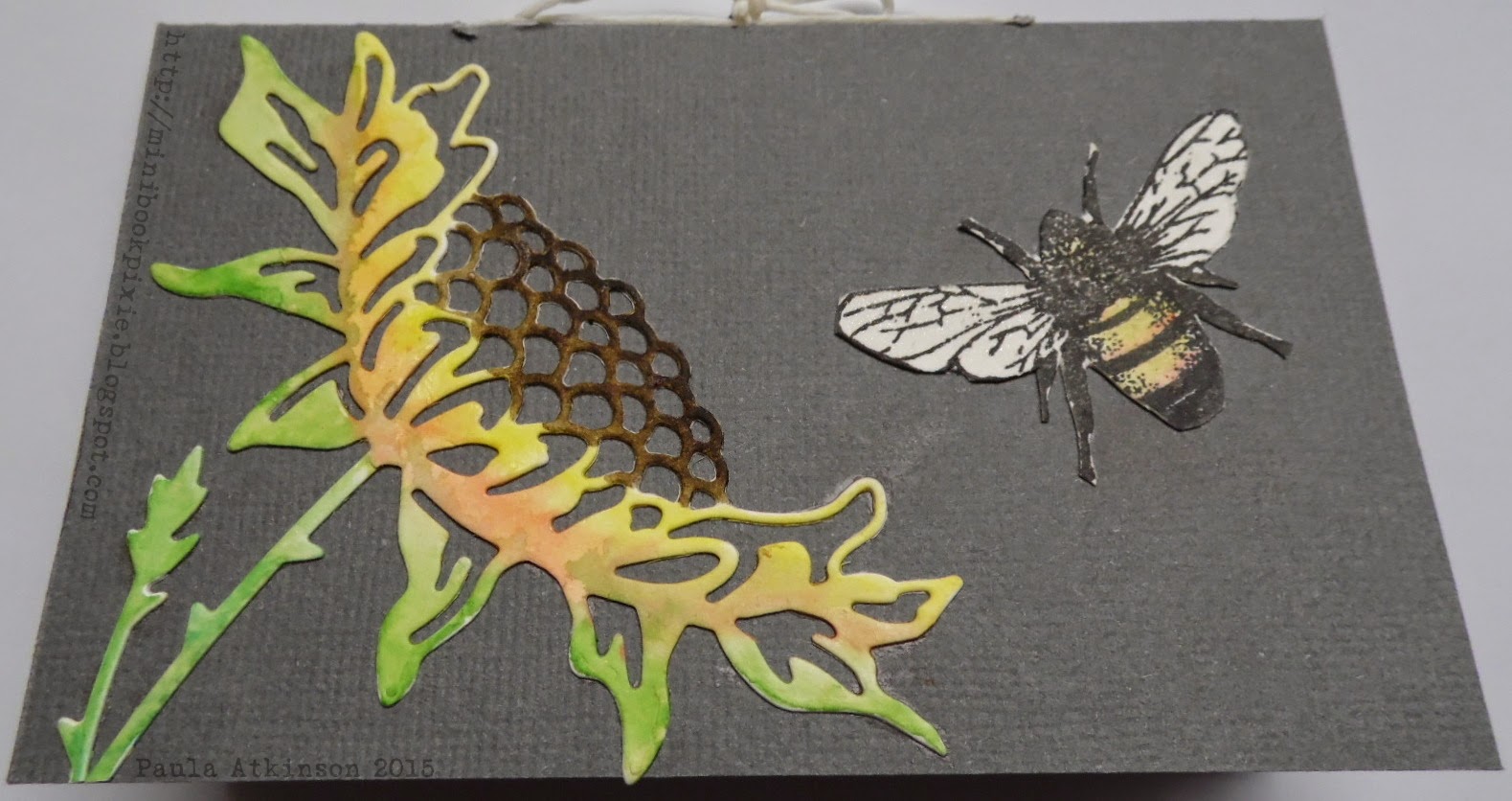 I am very pleased with how this came out.
I recommend this type of mini album.
The panels were all cut from Bazzill cardstock
and then ivory card panels were cut to size
and embossed with my Big Shot.
Embossing folders used;
Brenda Walton Songbirds & Lattice
Brenda Walton Floral Tapestry & Sweet Blooms
Kassie's Brocade
Posted by Paula J Atkinson at 1:18 pm 2 comments:

﻿
My sister & her hubby were forced to move to a new
rental home at the end of February.
The cost of renting is spiralling out of
control and when it gets too expensive
we have to look around and move somewhere cheaper.
Moving is stressful and so I sent them a bright
card to cheer them up and I also made
a mini "New Address" kit.
First the card. 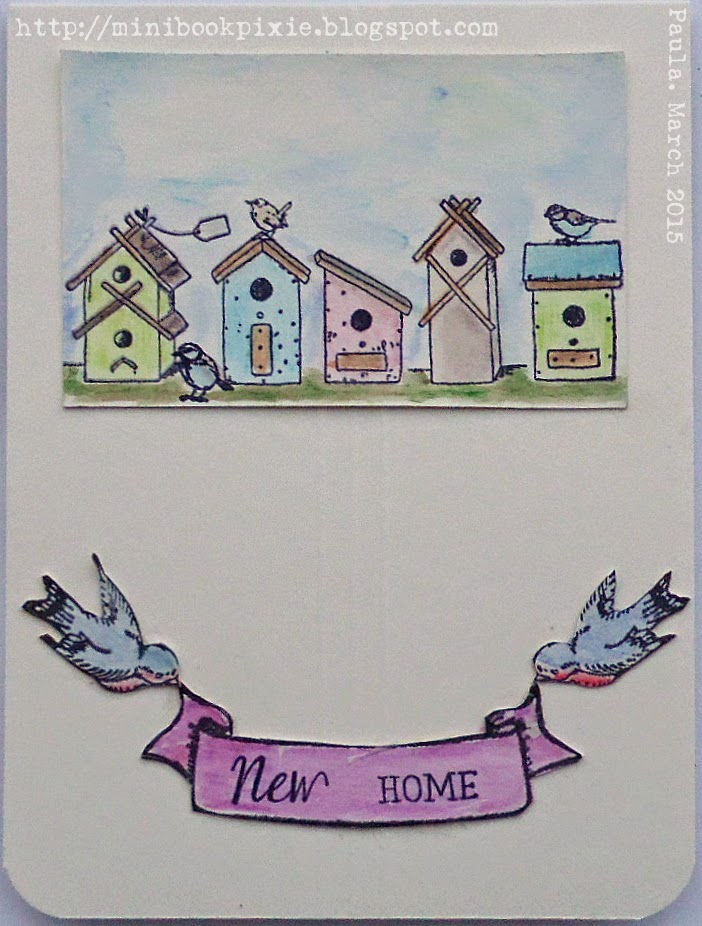 Front of the kit﻿ 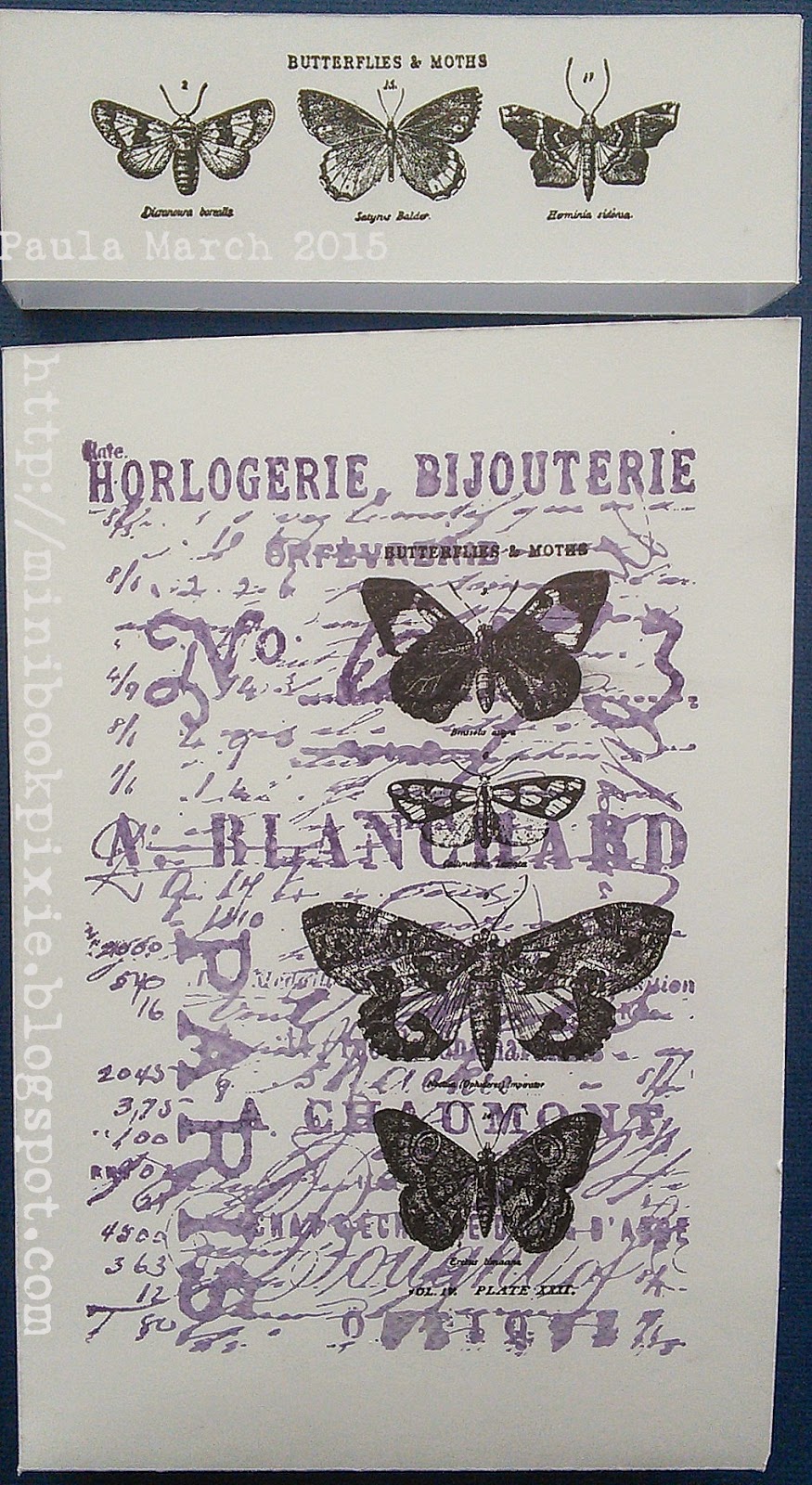 Back of the kit 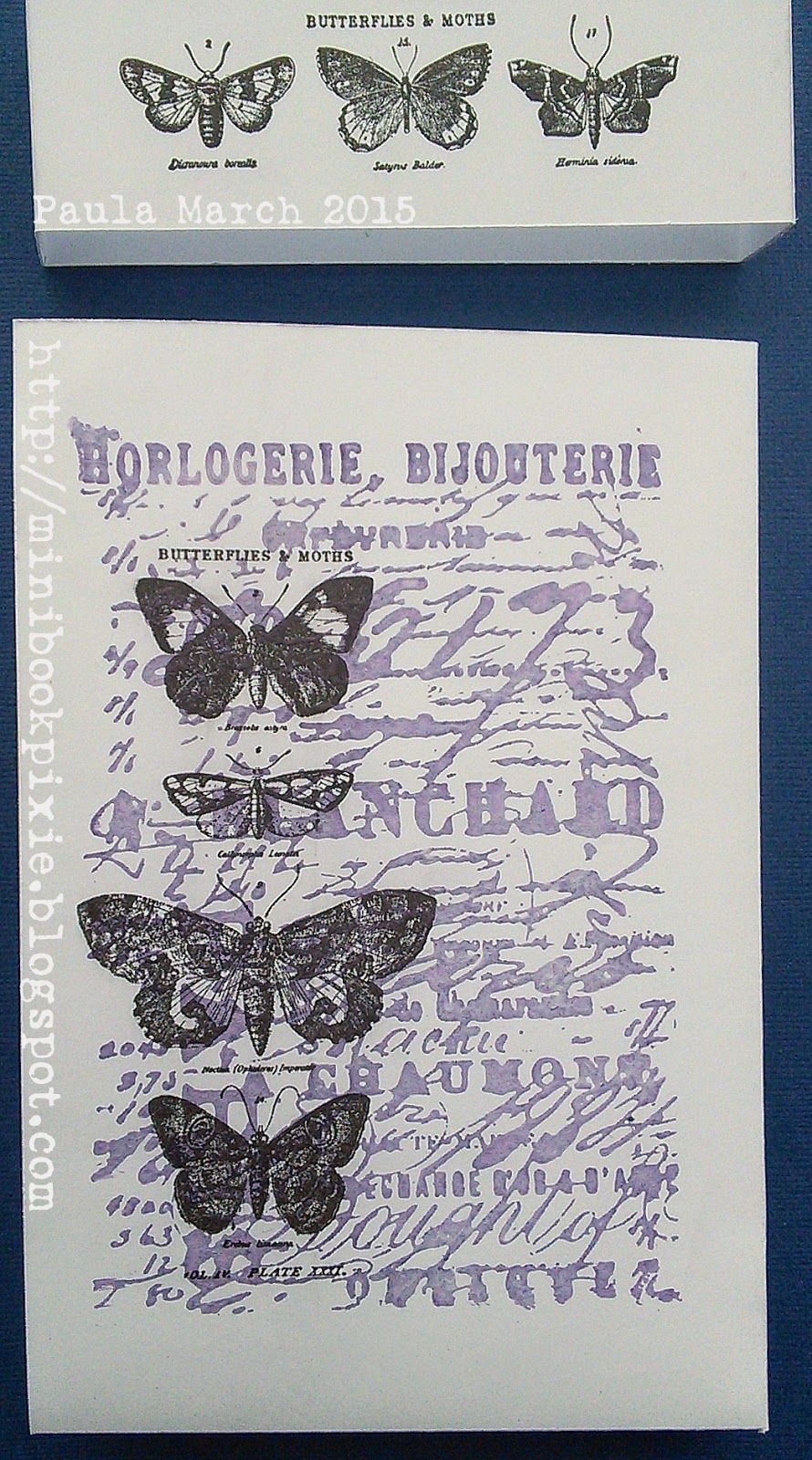 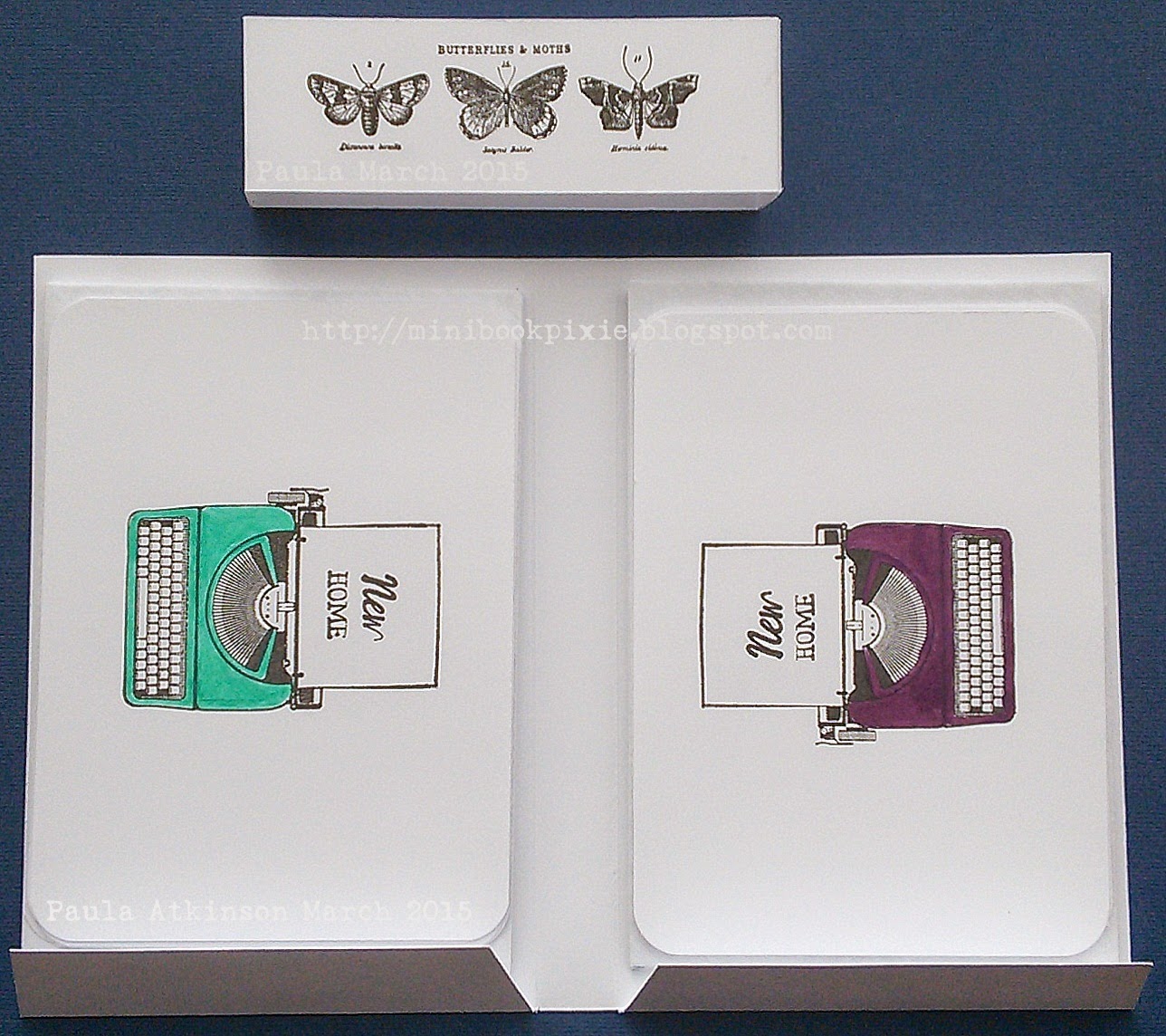 Each card is a single piece of card with an
address sticker on the reverse.
I made 12 cards. I included a book of 12 stamps
& added the extra labels. I forgot to take a photo
of the kit closed with the belly band shown above it.
The typewriters were coloured with Silk Acrylic Glazes.
Covers made with distress ink & gesso,
Tim Holtz Papillon stamp.
Other stamps & supplies;
free magazine stamps,
Papermania bird house stamps
Inktense Watercolour pencils.
﻿
Posted by Paula J Atkinson at 3:49 pm 3 comments: 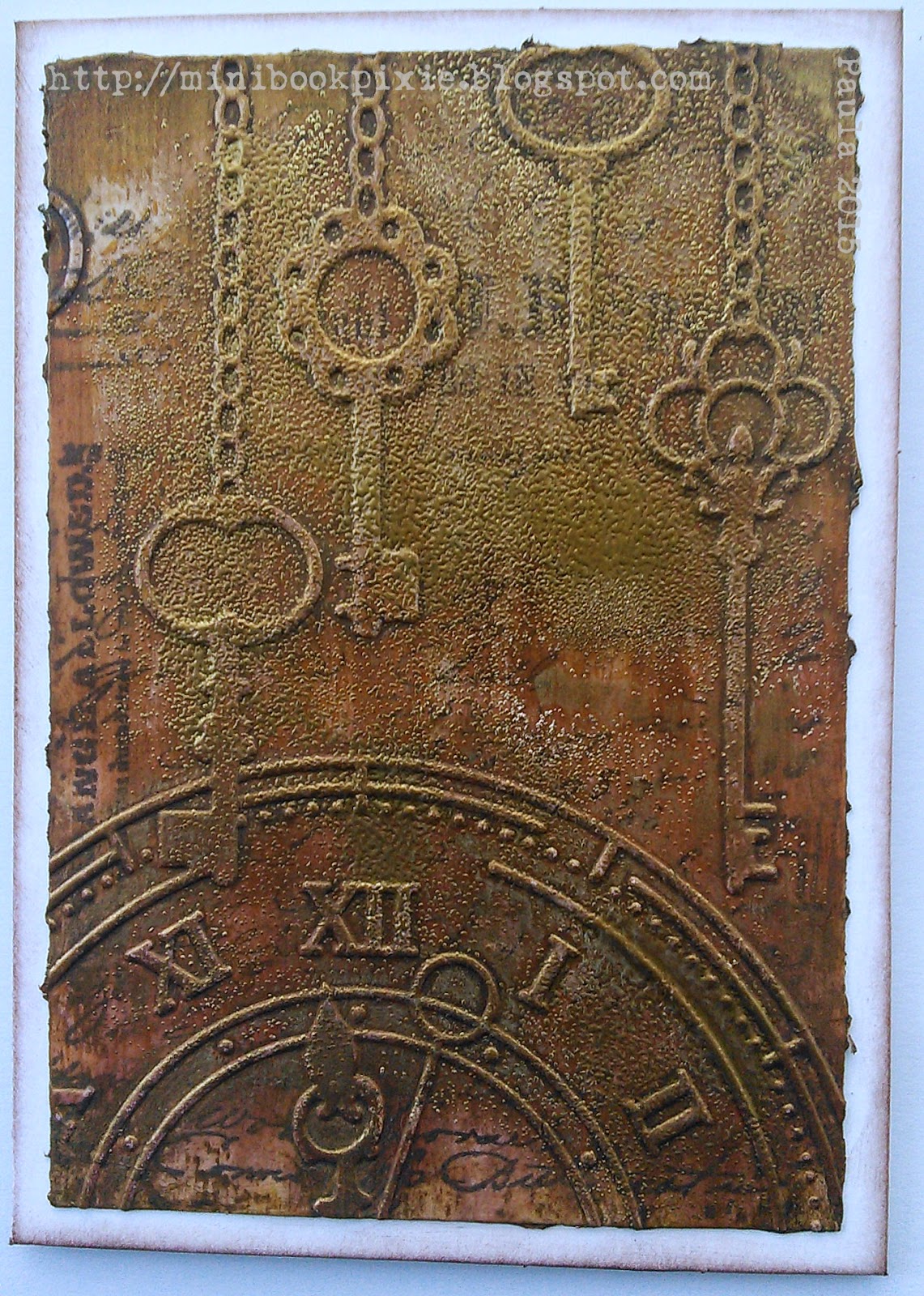 Today is my dad's birthday.
I created this card for him from scratch!
To begin I stamped my image on white tissue
then once dry attached it to watercolour paper.
I then applied an acrylic wash of brown paint.
This was then sealed with clear gesso to seal the colour in
and to provide tooth for the next layers.
I built the colour up gradually & then dry embossed with a folder.
I then rubbed brown/gold Inka gold over all raised areas,
heat embossed sections with Enchanted Gold powder
& finally, I highlighted some areas with Enchanted Gold Metallic Gilding Wax.
I have been very busy crafting but nothing to show as yet.
I was commissioned to create a wedding album,
but it is for her to give as a gift & the wedding is
not until 21st March. So, I have had no time for
my art journals, just cards. (Although I do have
4 pages in progress!!) 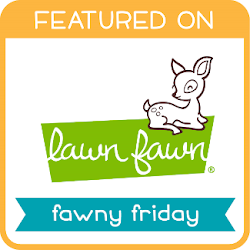 Paula J Atkinson
Since Childhood I have always loved to make things. My Grandma taught me crochet and knitting. I love to create using inks, paint and canvas anything really!!!